More excitement at Riad Romm'an last week with the arrival of the woodwork for the windows and wardrobes.  Some of the windows have decorative ironwork, which is a traditional moroccan feature. 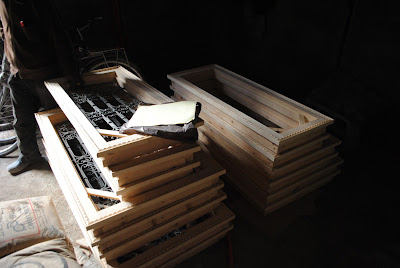 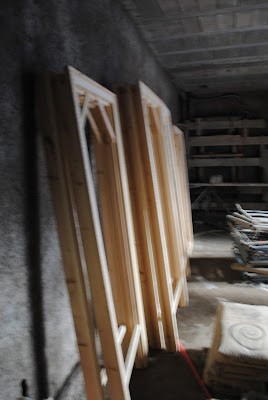 And the boys waste no time at all in getting the door and window frames into their correct openings. 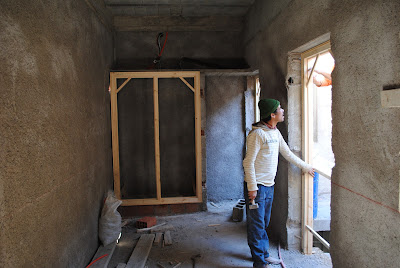 The favoured technique of balancing on an oil drum or plank of wood (at second floor level!) is once again efficiently employed. 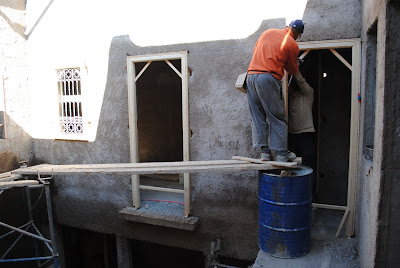 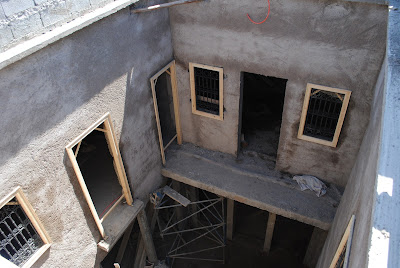 However, there is method here, there is attention to detail and the unusual and conscientious step of the plasterers to wrap the wooden window and door frames to protect them from the imminent plastering of the patio internal walls.  The guys really are being super good on this front - taking real care to look after things. 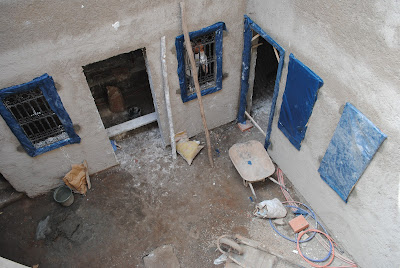 Finally, a lovely picture of the frames for the french doors to the salon being inserted to their openings.  Its really beginning to look like a riad now! 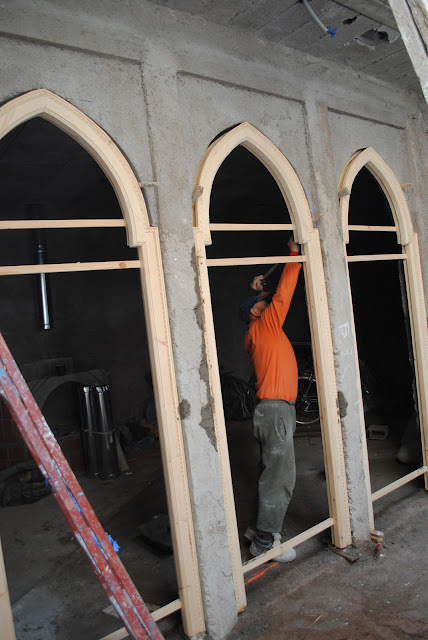 Following hot on the heels of yesterday's blog post about the fireplace's of Bill Willis, a rather exciting photograph just came through on email from Grant Rawlings.  The guys have started work on a feature fireplace for the main salon of Riad Romm'an. 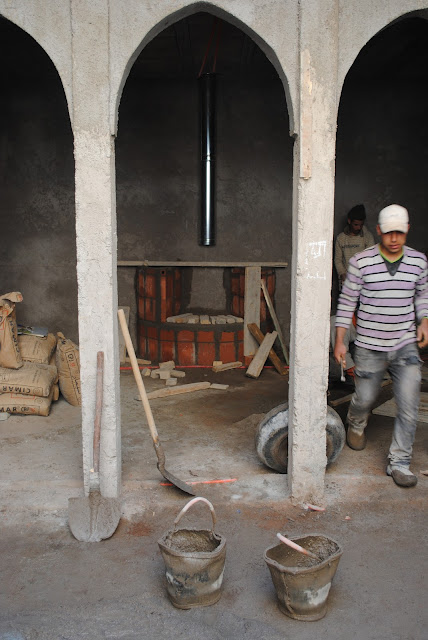 The design concept is based on a fireplace at the wonderfully grand Palais Rhoul in the lux haven of the Marrakech Palmeraie (see pics below) and will have sculpted plaster with a curved stepped threshold. 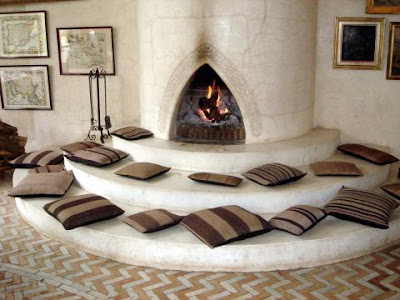 The Fireplaces of Bill Willis

The high priest of Moroccan interiors, Bill Willis was a Tennassee-born designer and architect.  In 1968, Willis's wedding present to friend Paul Getty Jr and his new bride Talitha was a Moroccan honeymoon.  Willis tagged along.  The trip ended in Marrakech and none of them wanted to leave.  So the Gettys bought the Palais de la Zahia, commissioned by the Glaoui of Marrakech in the 18th century.  Willis worked on the Getty House, twice, then designed one for the Rothchilds and another for Yves Saint-Laurent next to Majorelle Gardens.  The list goes on like a who's who of global elite expats in Marrakech. 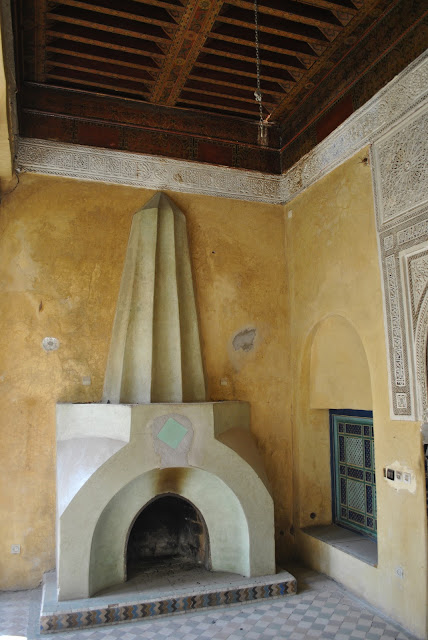 Willis has been described as the "eminence grise" behind the growth of the design trend for all things Moroccan.  For four decades, the architect and decorator became synonymous for voluptuous houses redolent of concubines and the woozy, opium fogged dreamscapes of 19th century Western painters like Georges Clairin.  Nothing in his background - being from Memphis he spoke perfect french with an unforgettable Delta drawl - suggested that he would be reviving zellij mosaic work or polishing rendered walls with river stones and waxing them with savon noir (black soap) to an alabaster sheen. 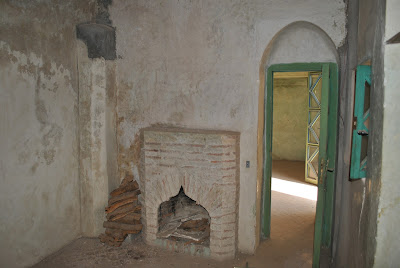 He bought a small palace in the medina of Marrakech in 1973, which dated from the late 18th century and had apparently been the home to the harem of a member of the ruling dynasty.  Instead of following convention, he stripped the walls of the ornate plasterwork and 'zelliges' which he considered distracted the eye from the exquisite wooden 'koubba' over the central courtyard which is the main feature of the house.  He applied 'tadelakt' to the walls in tones of ochre and yellow to create the smooth, luminous surface that is now considered emblematic of his work.  In this way he created a space that was evocative of the spirit of Marrakech interiors well before the arrival of over-elaborate decorative techniques of period of the Moors.  He opened up windows, redesigned the floor plan and decorated his home with an intelligent amalgamation of Moroccan craftsmanship and good pieces of furniture acquired during a lifetime of collecting. 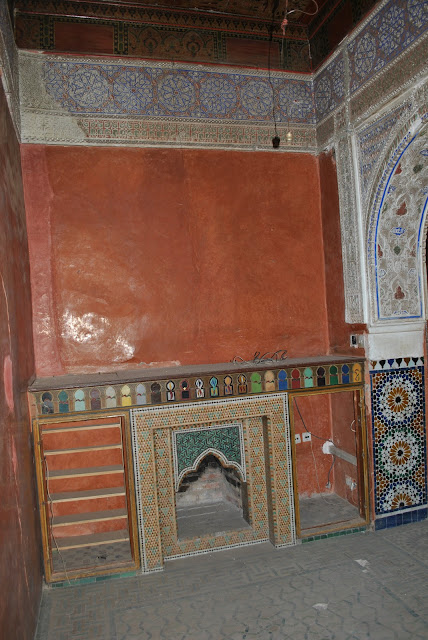 Together with the renowned architect Charles Boccara, he kicked off the whole modern-ideas-with-Moroccan-materials philosophy that still underpins Marrakech style. In particular, Willis's trademark were the fireplaces he created using hundreds of tiles lain in a dozen eye-bending patterns. 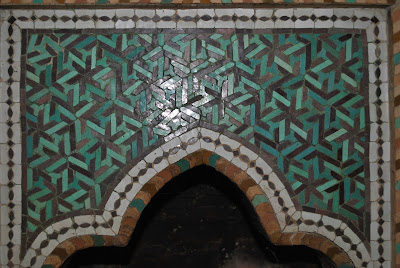 Below is a picture of the fireplace in the main drawing room.  This room was originally the courtyard.  At some point in the 19th Century this area was covered over with a magnificent dome in carved, sculpted and painted wood.  As a result Willis inherited an exceptionally beautiful square room, a very rare occurrence in Morocco where the traditional floor plan includes only rectangular rooms. 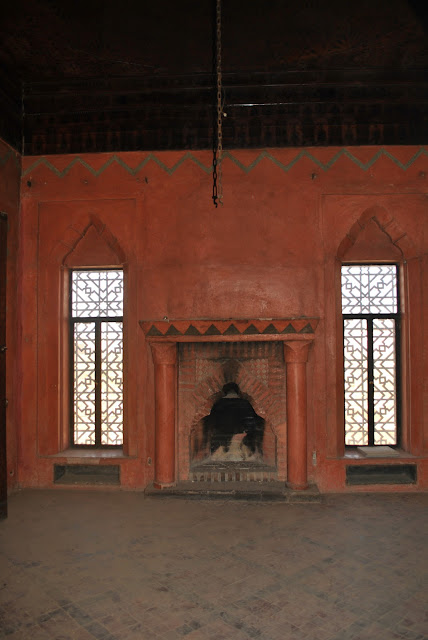 Sadly, Willis's house is now empty and looking unloved.  However, it was recently for sale and hopefully soon someone will take it on and breathe new life into it.  Our designer and agent Grant Rawlings is selling agent and more details of the wonderful iconic house are on Grant's blog.  Interestingly, Riad Romm'an's builder Abdellatif did all Willis's building work for him.  Thanks to Grant Rawlings for these photos of the many fireplaces in Bill Willis's house. 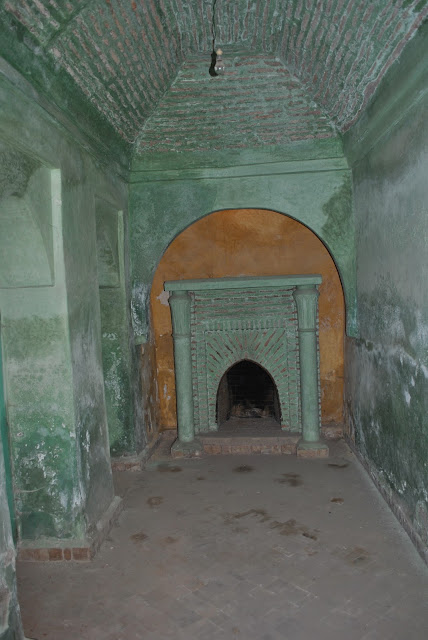 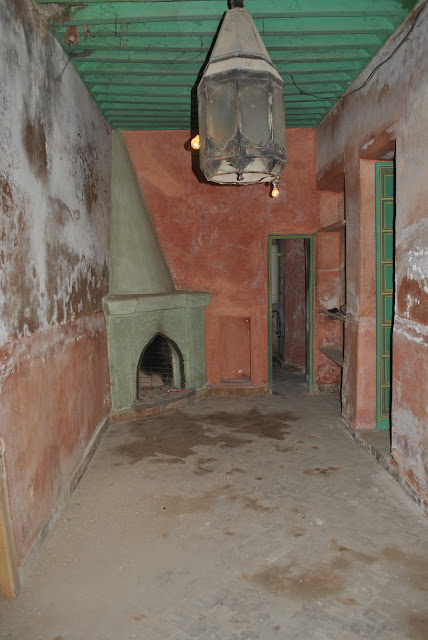 Bill Willis's work can also be seen at Dar EL Yacout, another private house hidden in the medina, which since 1987 has become one of Morocco's best known restaurants.  To find it you follow a thin alley and stoop through an ancient wooden door, stepping into a dingy vestibule.  Moments later you are in a sumptuous palace, where the walls are stripped with faded turquoise and tangerine, or yellow off-set with Marrakech red, and topped with unfeasibly elaborate stucco and carved wood ceilings.
Posted by Scott Mackay at 14:18 1 comment:

Construction work at Riad Romm'an progresses rapidly with no let up.  In our absence Grant Rawlings of Chic Marrakech has been busy, as have the workers on site.  With the builders still on site and the electrics and plumbing going in, decisions have been made quickly regarding the kitchen and bathroom layouts...
In Morocco it would appear that builders will build anything you like, if you ask nicely enough.  So instead of a conventional fitted kitchen, how about just building the units, with a built-in sink, worktop and shelving...all in concrete?  Drawings and pictures of examples were exchanged over the internet and skype in order that the builders could understand what we had in our crazy minds.
If this works for the kitchen, why not the bathrooms?  Moroccan bathroom design provides plenty of quirky imaginative ideas.  Again concrete or brick built and finished in tadelakt (a polished waterproof plaster traditional to hammans).  Instead of fitting a conventional bath and/or shower, let's get the builders to build them, plus they will make them any colour you like!
Continuing with the 'build rather than buy' theme, lets not have conventional beds, just build them in, along with bedside shelves!?