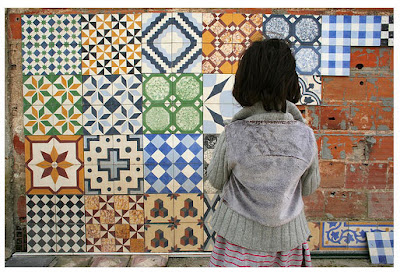 Traditional handmade cement tiles (often called encaustic tiles) have been used, not just in Morocco, but throughout the Arabic world for thousands of years and have recently seen a contemporary revival through their use by iconic designers such as Ashley Hicks and tiling specialists such as Popham Design, Walker Zanger and Ann Sacks.  They combine function with style and once more are back in fashion in Marrakech after many decades of being overlooked in favour of other flooring such as zellige, bijmat and tellisa. The lovely matt finish and soft silky texture are characteristics which make Moroccan cement tiles unique. They are brightly coloured and often intricately patterned, yet made from simple materials, employing age-old techniques. 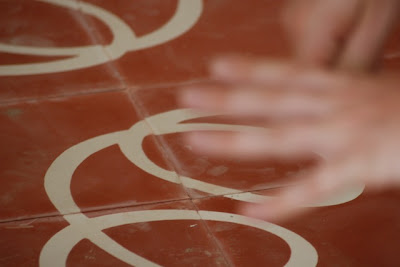 We were very excited to be at Riad Romm'an when the delivery of Popham Design tiles arrived!  Popham Design was started by friends in Marrakech, Samuel and Caitlin Dowe-Sandes after they moved there from Los Angeles. Their tile designs are simply stunning with an unusual mix of contemporary design with traditional Moroccan influences.  We love them and are very excited to use their iconic 'loop di loop' design in Riad Romm'an's dining room and kitchen.

These tiles are hand-made from locally sourced natural materials, in a low energy production process. The materials, cement, ground marble dust and natural earth pigments, are set in layers in a tile mould then pressed using a hydraulic press. Then the tiles are removed and submerged in water to provide sufficient moisture content for the concrete chemical reaction.  The tiles are set out to dry and allowed to age so that they acquire an adequate hardness. The tile face is a quarter of an inch thick, providing the tile with a great surface life, which is able to withstand adverse weather conditions and decades of traffic. 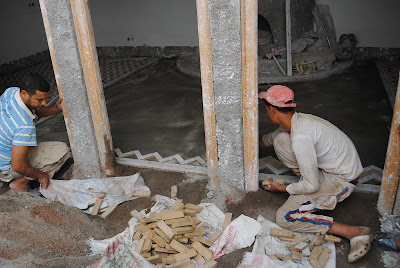 Throughout Riad Romm'an, where appropriate, we have incorporated a number of other traditional tile options including Zellige, Bijmat and Telissa.  Bijmat are small rectangular terracotta and glazed tiles which are cut to fit into regular patterns. 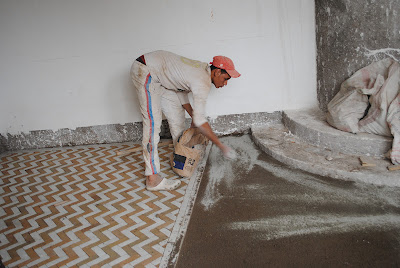 The floor of the salon is finished in a zigzag pattern of alternate white and beige glazed bijmat tiles (above). 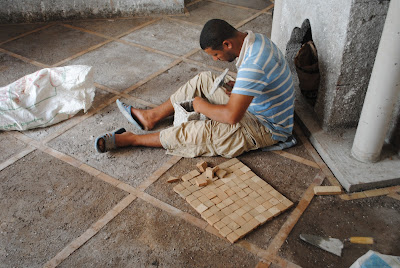 Bijmat also used to make borders for the telissa squares (above) where the central squares are finished in Tadelakt.  These often require cutting to fit the geometric patterns required. 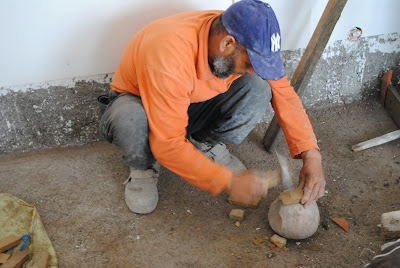 Keeping with the layout of a traditional four sided riad, the courtyard has a centrally located fountain which will bubble with water to keep the house cool. Work began in the fountain in July with the setting out of its base which will soon be surrounded by intricate patterns of zellige tiles. 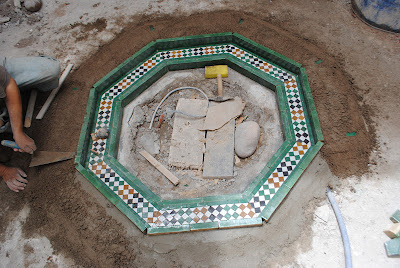 Below is Boushma.  In addition to helping with the building work, Boushma actually lives in the Riad to look after it, as its guardian.  Initially we mispronounced his name 'Bijmat'!  This picture also shows the derb paving where we had to put in a new pipe to connect the house to the sewer network (the house was so old there was none!) and then repair the block paving.