Campervan adventure - A tale of driving to Marrakech from Scotland

In early July this year with a campervan (called Herman) packed with items for Riad Romm'an such as bedding (6 sets), towels (12 sets), stereo, other bits and bobs (in fact everything we couldn't take on a plane there) plus essential things for our journey, we set off on our adventure driving from Scotland to Marrakech. 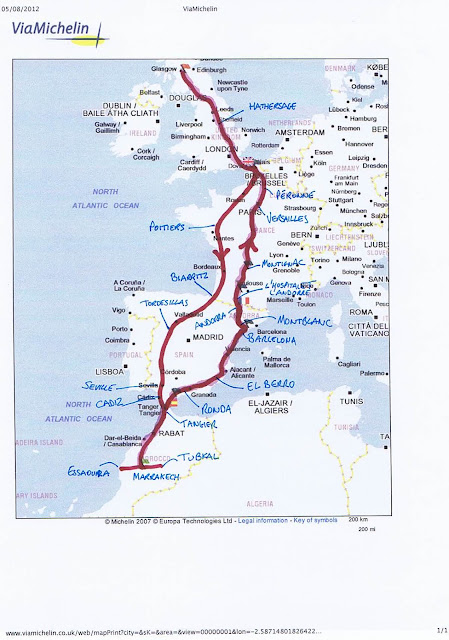 After an overnight stop at the in-laws in Derbyshire, we left early for the Eurotunnel at Folkstone.  Eurotunnel was very quiet, so we were let on an earlier train (2 hours earlier than booked) and therefore arrived in Calais much earlier than planned.  We therefore cracked on down the Autoroute to get as far into France as possible in one day.  After arriving at a campsite too late to check in we carried on and stopped for the night at an Aire on the A10 outside Poitiers.  To our amazement, we had covered 416 miles on our first day...well it was raining!


Another early start and we drove into La Rochelle in search of a nice spot to stop for breakfast. We parked up overlooking the Bay of Biscay on a lovely warm summers morning and made breakfast (with mugs of Yorkshire tea of course!)  It was hard to take it in that only yesterday we were in England!  Off down the Autoroute again, we passed Bordeaux and covered another 268 miles before stopping just short of the Spanish border at a campsite in Biarritz.

Dinner and a lovely walk in the town on the night Spain won the European Cup meant a celebratory atmosphere in this lovely seaside town. 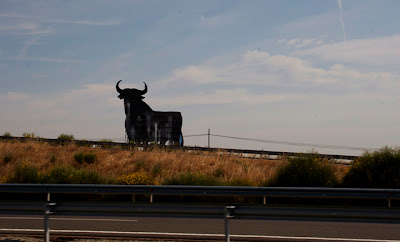 The next day we crossed the border into Spain and the weather just got hotter.  254 miles later we arrived in the lovely historical hilltop town of Tordesillas in central Spain.  A nice campsite on the river bank a short walk into town.
Another long drive the next day in scorching 40 plus degrees heat and after 322 miles arrived in Seville, where we camped for the night and spent the next morning exploring.  Thankfully Herman's air-conditioning worked perfectly!

The afternoon we drove to Cadiz for a wander and lunch and then headed off to Tarifa with the intention of camping before getting an early morning ferry to Tangier in the morning.

However, the sight of Africa so close across the Mediterranean Sea was too tempting, so we kindly asked to get on the 7.30pm ferry which was about to leave.

Eventually with Moroccan determination, ingenuity and humour, they managed to squeeze us on after reversing on and off again.  We arrived in Tangier, just as the sun was setting around 9pm.  We had made it to Morocco! 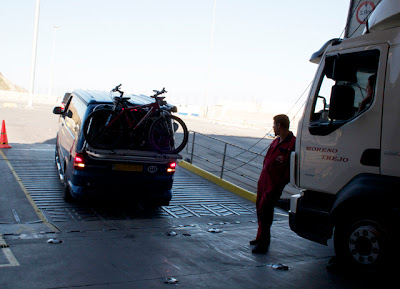 After the initial shock of driving off a boat into the madness of central Tangier roads we wove our way through the city centre, found a cash machine to get some precious dirhams and headed for a campsite.

Like many things in Morocco, camp sites here are not exactly to European standards, but at only 10 dirhams (about 70 pence), it's not worth complaining!  We just wanted to get our heads down for the night before the last push to Marrakech in the morning.

356 miles down the road from Tangier, we arrived in Marrakech mid afternoon.


We were so excited to see how Riad Romm'an was coming on that we drove straight to Derb El Boumba and parked outside in the narrow derb (no mean feat!).  After off loading stuff for the house, we realised it was not quite as ready for us as we had hoped.


This was no problem, a toilet could be installed in 5 minutes we were told.  Hmm...we thought.  Fortunately (perhaps!?) Hicham the boss had already lined us up with another riad across town to stay in until Rian Romm'an was more ready for us.  Before we could say "that sounds better", the double mattress we had ordered for one of the Riad Romm'an bedrooms had been lifted onto the roof of Herman and was being tied on (badly) with a rope.  "You will need this to sleep on as the other Riad has no furniture"!

A quick drive through the madness of Marrakech rush hour traffic, with the mattress sliding around the roof and threatening to slip off, we arrived at Bab Doukalla.  The mattress still on the roof (after a few stops on a roundabout to get it straight again)!  We are told we are proper Moroccan drivers now!

For a foreigner driving in Morocco is not for the faint hearted....it is an experience not to be forgotten!  To try and capture it's uniqueness, we made this short video of clips from our road trip by Herman, our VW campervan, from Tangier to Marrakech and around Morocco.  Music by Khaled.