It has been said that in Morocco, the most interesting news is not what is spread by the newspapers or seen on the TV, but comes softly, is revealed slowly, as if carried by whispers on the wind.


That is how we learned of the Royal Mansour, the latest in top-end luxury in Marrakech.  Someone heard it from their maid who had heard from her cousin, and he from his brother's wife, that a palace was being built, one that would surpass almost anything else ever created by Moroccan artisans.  Time passed and the rumour was quite forgotten.  Then, one day the whisper came again:
'It's finished,' said a quiet voice.
'What has?'
'A palace fit for a king.'
Well we just had to experience it for ourselves.  If it really was this good, perhaps it could provide some design inspiration for Riad Romm'an? 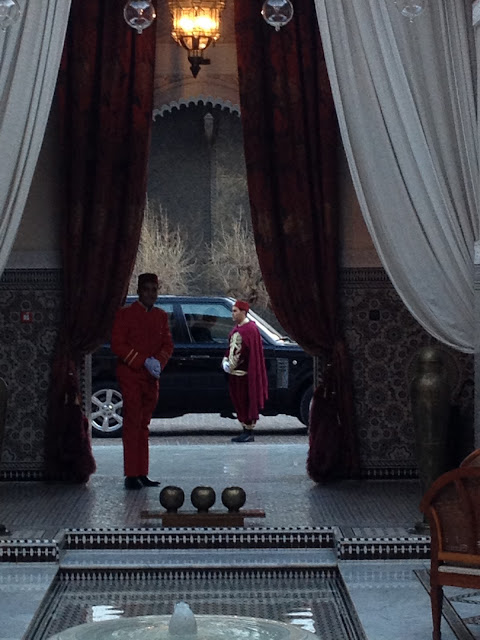 In a city that's not short of luxury hotels, the Royal Mansour stands out by attaining a whole other level of quality.  Turning off Boulevard Al Yarmouk the chauffeur driven car passed through Bab Sidi Ghrib with its manned guard post (Bab Sidi Ghrib is one of 20 arched gates within the ancient rose-coloured walls of the Marrakech medina, built in the AD1120s).  Now within the medina and on the private road of Rue Abou Abbas El Sebti which leads to  the entrance to the Royal Mansour,  the car approached and two huge bronze gates opened ceremonially lifting the veil on an Arabian Nights fantasy, one that's usually off limits to mere mortals like us. 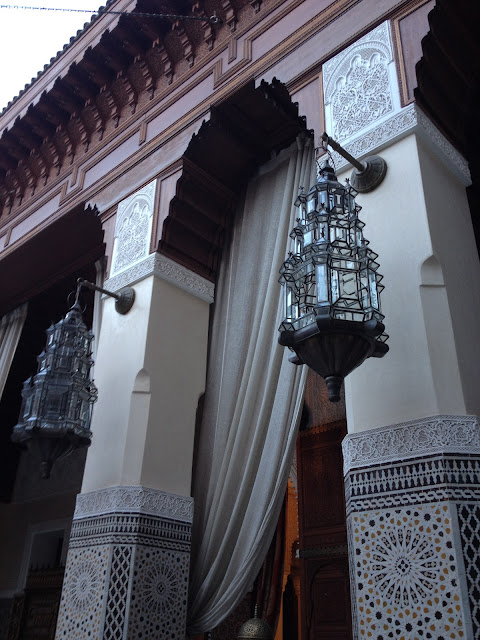 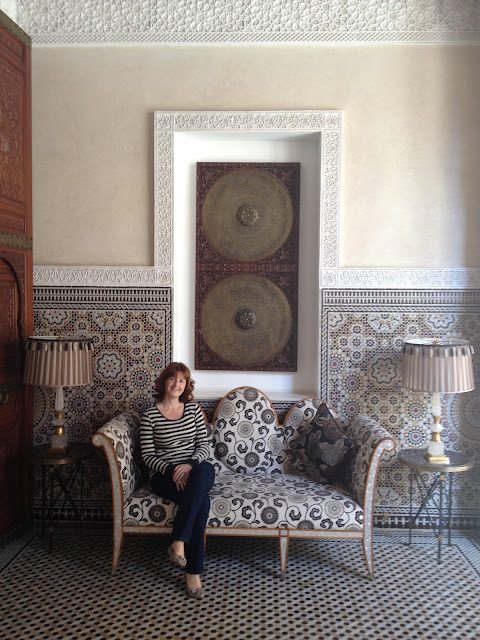 Upon arrival, it seems like you are the only guests.  Staff glide up without making any noise at all and greet you in whispers.  They lead you to your quarters, through a labyrinth of jaw-dropping extravagance.  Wherever you look, every inch of every surface is adorned with exquisite workmanship and textures - miles of intricate zellij mosaics, hand-sculpted plasterwork, cedar ceilings and geometric painted wood.
At the heart of the hotel is a central courtyard open to the sky.  Fabulous bronze lamps suspended, each one in itself a work of art.  The huge bronze lantern below was designed by the famous British/Moroccan designer Yahya and took 6 months to make.  All around there are handcrafted Andalucian cabinets, fantastic mosaics, marble fountains and banquettes inlaid with mother of pearl. 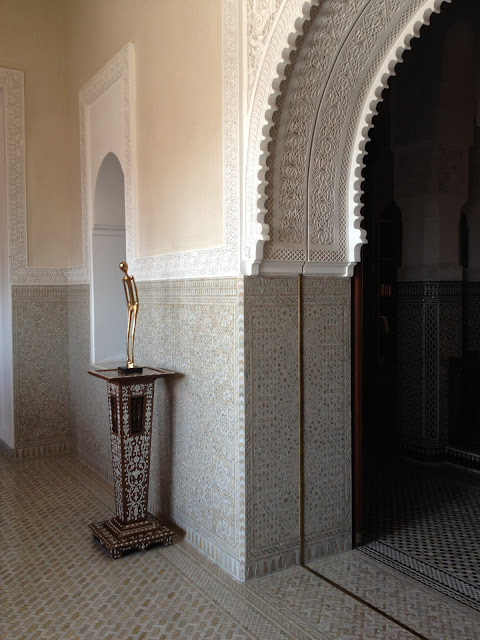 What is most surprising though is that the whole Moroccan fantasy is shrouded in the kind of peacefulness that seems impossible within the walls of the Marrakech Medina.
This being the Royal Mansour, on arrival you are greeted by the hotel's smart manager, who escorts you himself.  We tried to suppress all delusions of grandeur and followed him into a courtyard filled with the sound of trickling water and with fragrant trees bearing ripe pomegranates, oranges and dates.  Eventually you enter a Medina, a mirror of the old city in miniature. 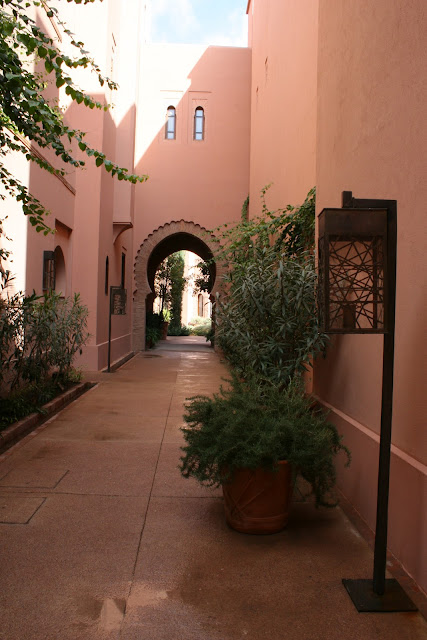 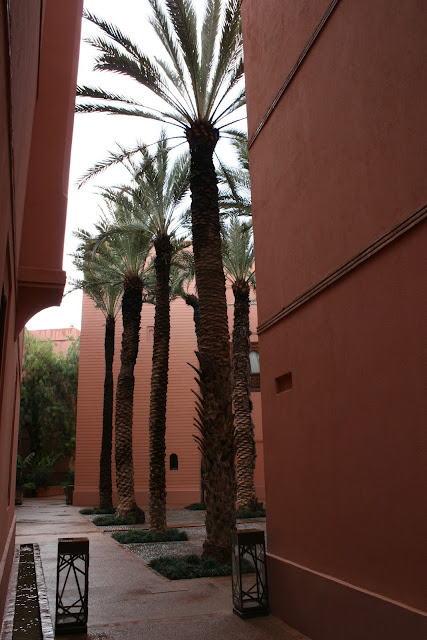 There are no rooms or suites here, instead you are taken to your very own riad, a three storey building set around a colonnaded courtyard.  On entering, your personal butler anticipates  every need and offers vintage Champagne. 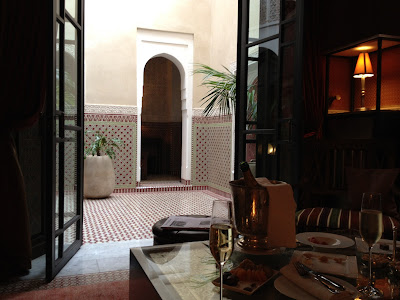 As if by magic, your luggage has been transported to your bedroom, signaling what is particularly extraordinary about the Royal Mansour, how your butler, and everyone else, comes and goes invisibly, without ever stepping in or out through the door.  This is because the Royal Mansour is a creation of wizardry conjured up by the King of Morocco himself.  The great secret that makes its illusion possible is that beneath the entire property - laid out over eight acres - is a vast labyrinth of secret tunnels, a small town itself housing vast kitchens and warehouses, laundries and staff quarters.  And according to our butler, along the tunnels run a fleet of new golf carts ferrying staff, luggage, and room service, etc from place to place, all without guests being disturbed, or even aware. 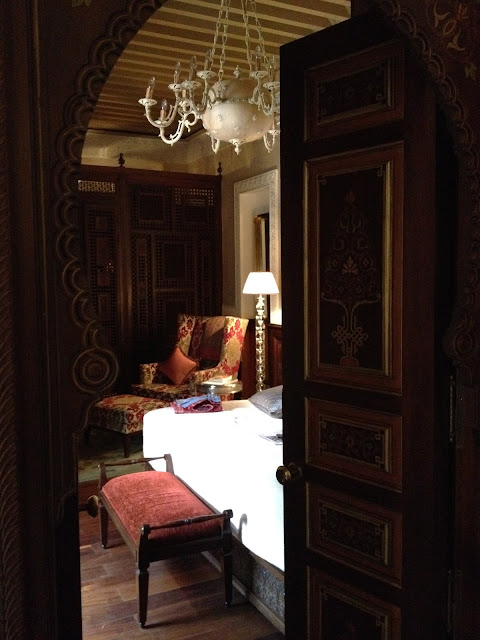 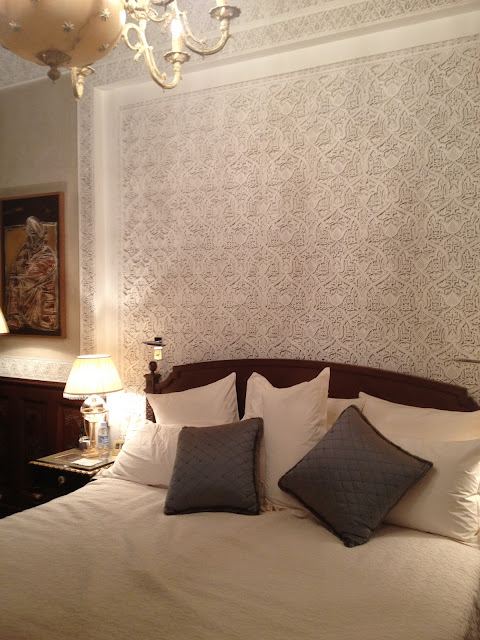 King Mohammed VI himself envisaged the Royal Mansour and directly oversaw every detail of the project.  No budget was fixed for all this, just a royal edict that the Royal Mansour should take as much time and money as was necessary.  Twelve hundred mouslems or master craftsmen worked on the project and were instructed to make it the best work of their lives.  After all, they were working directly for the King.  This is the key to why the Royal Mansour is not just another smart place to stay in Marrakech, but is a work of art which will stand the test of time.
I asked our butler if he had met many celebrities staying here?  He paused, looked serious before thoughtfully answering, "No....mostly just presidents and princes." 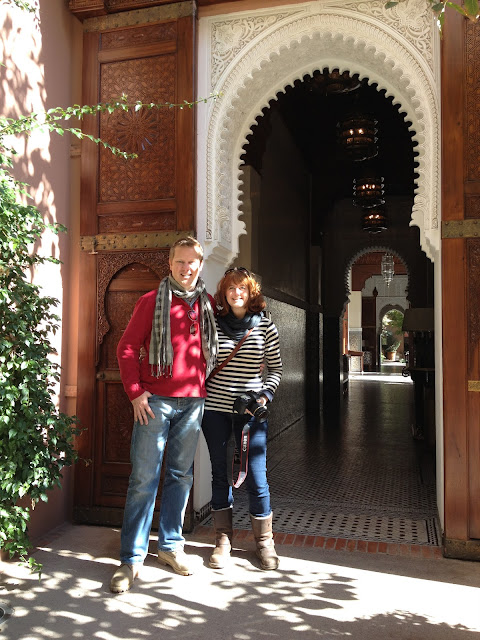 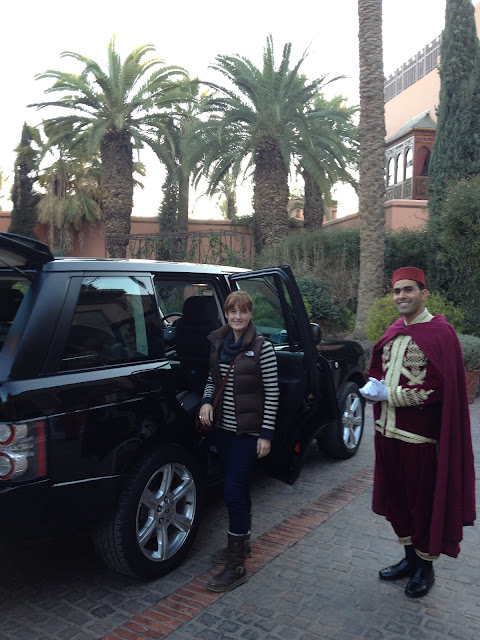 With thanks to Tahir Shah for making us aware of the Royal Mansour and for inspiring this post.
Posted by Scott Mackay at 04:46