Week One: Walls come tumbling down

Hicham (our foreman) and the guys have been very busy this first week demolishing the old riad walls, by hand.  Its dusty work! 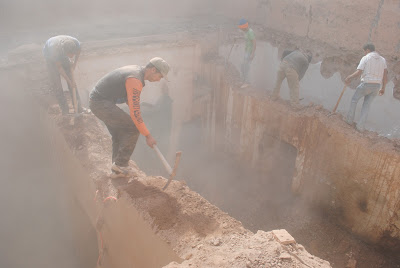 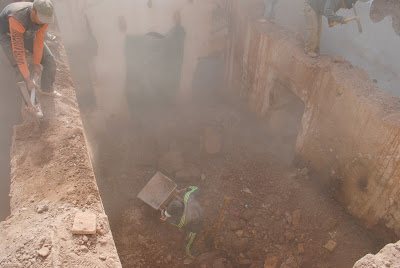 Dust is a big problem as the old walls are so dry.  We don't want to upset the neighbourhood by covering everyone's homes in dust.  The water supply to the house is disconnected, so the men have connected a hosepipe to next door's water supply by punching a hole through the wall! (see below) 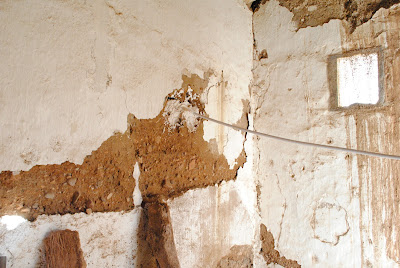 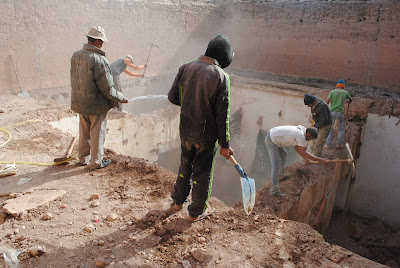 Hicham is trying to keep the dust down, by using water from the hose. 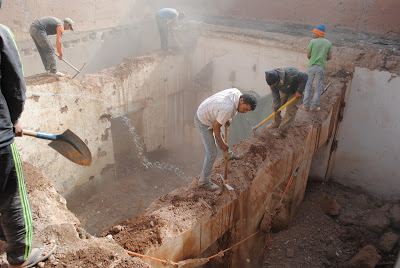 The old riad is constructed from traditional Pise or rammed earth walls.  This ancient building method does have benefits in a hot climate like Morocco.  It is simple to construct, non-combustible, thermally efficient, strong and environmentally sustainable.  However, pise walls are susceptible to water damage and as we could see from our own review of the  old riad's walls, there was a lot of damage.  We could not therefore guarantee the structural integrity of the old walls and to try to renovate the riad by keeping them would be too risky as walls could collapse at any time.  The removal of the old pise walls (which are nearly 1m think in places) will provide us with the ability to create much larger, open rooms due to modern walls being thinner. 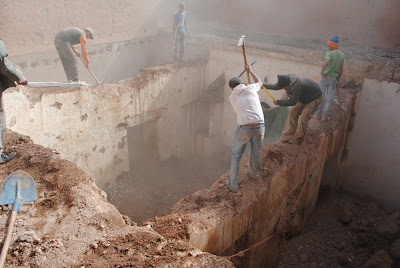 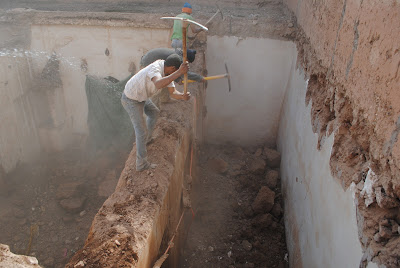 Some of the walls will be retained for a while longer in order to provide some stability to the walls of neighbouring houses until the new structure is constructed. 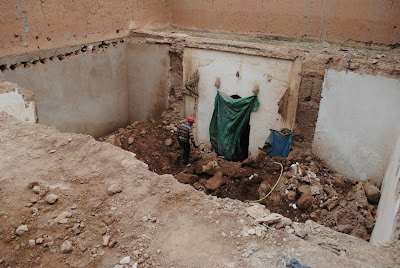 Much of the earth, rubble and stone will be compacted down on the ground and flattened in order to start raising the floor level.  The existing floor level is about 50cm below the level of the street outside (see below). 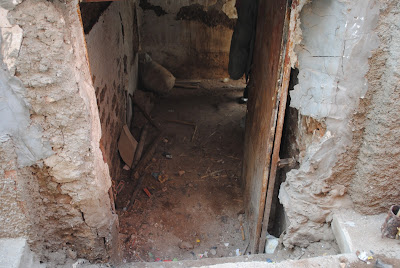 This was because when the house was built the streets were not paved and there was no modern drainage/sewerage system in place.  When the streets were paved and pipes were put in, the work was merely done on top of the existing street level.  Demolishing the old walls and starting from scratch enables us to create a new floor level, which ties in with the level of the street (derb) outside as in the new doorway below. 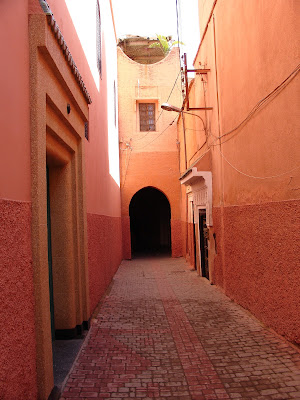 The thought of walls coming tumbling down, is not usually a positive thing.  Especially if you are not in control.  Some old riads may be worth preserving because of their character and the thick walls do offer natural air conditioning against the heat in Marrakech.  But many riads have not been well maintained and become structurally unsound with no structural framework or foundations to give support.  Its not uncommon for riad walls within the medina to suddenly collapse without warning! 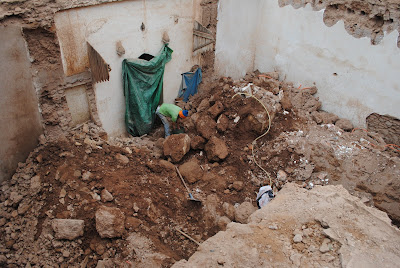 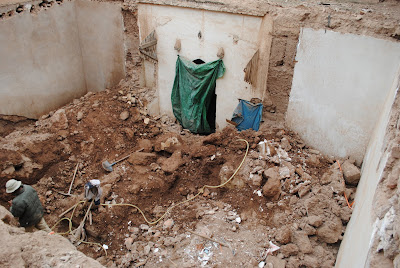 We chose this old riad because it was not worth saving due to the condition of its walls. It was more worthwhile to simply demolish it and build a new one in its place.  The additional benefit of completely rebuilding the riad is that it offered us the opportunity to redesign the house and overcome the spatial deficiencies of the traditional riad floor plan with its long thin impractical rooms lining each side of the central courtyard.  Traditional riad room widths often don't have the space to accommodate a double bed with enough space either side to get in and out. 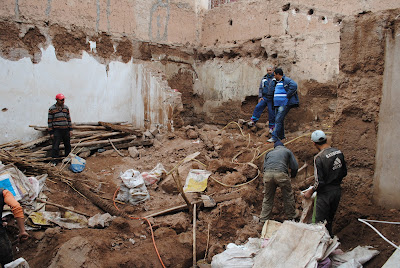 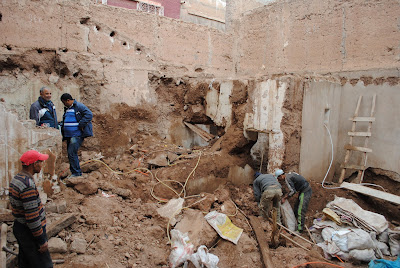 Its been raining today in Marrakech and I imagine the site is now a mud bath.  Perhaps Hicham will not need the hosepipe tomorrow!
Posted by Scott Mackay at 10:59